Why 2014 will finally be the year of online grocery 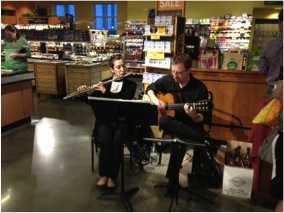 This article originally ran on BusinessWeek.com on Jan. 16, 2014.

Some people go to bars or clubs on weekend nights. I go to the grocery store. I love to mosey through the aisles, looking for new snacks, picking up five apples before I decide on the right one. I’m apparently not the only one. On a recent Friday night at the Whole Foods (WFM) in Cambridge, Mass., I encountered a pair of musicians, on flute and classical guitar, playing lovely melodies near the wine and cheese section. Clearly, the natural foods chain believes a lot of people see food shopping as entertainment.

Recently, however, disaster struck: I ran out of oatmeal. I realized it would be much easier to order a six-pack of Quaker Oats on Amazon.com (AMZN) than to make an extra trip to the store. I was even willing to eat (shudder) cold cereal for breakfast two days in a row while I waited for delivery. Thus, my pantry entered the Internet age.

My pantry is not alone; 2014 could be the year of online grocery. Traditional brick-and-mortar chains should be worried. The fact that AmazonFresh expanded to two new cities in 2013, after six years operating only in Seattle, is just one cause for concern. Currently, 3.3 percent of total U.S. grocery spending—a $500 billion industry—is online, according to a report from Brick Meets Click. It could reach 11 percent by 2023, a growth rate of nearly 13 percent per year.

Jon and I recently started watching “The Men Who Made America,” the History Channel series about Vanderbilt, Rockefeller, Ford, J.P. Morgan, and Carnegie. The first episode contained three great quotes, so I’ve decided to launch a series on 5-second innovation lessons. First, from Jack Welch: